CERRITOS, CA — The annual Southern California Fresh Produce & Floral Council membership luncheon featuring the City of Hope drew a huge audience of produce professionals to the Sheraton Cerritos Hotel here on Wednesday, Aug. 6.  Through donations, rebate programs and raffle tickets, the Food Industries Circle produce and floral division raised more than $211,000 for the City of Hope, a world leader in the research and treatment of cancer and other serious diseases.

Umina Bros. Produce received the City of Hope Spirit Award for its tireless efforts.  Dino Iacovino of Altar Produce gave an emotional speech about the City of Hope and how it was integral in his wife’s successful battle against cancer. He also described his own cancer journey and the modern technology that saved his life.

In addition, the City of Hope’s Dr. Raynald Samoa told the audience about the importance of nutrition and exercise, and how both are paramount in the prevention of cancer, diabetes and other diseases. 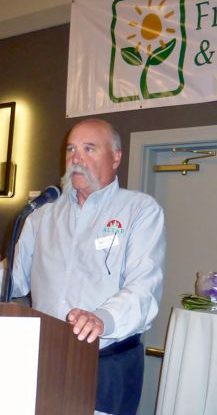 Dino Lacovino of Altar Produce detailed how the City of Hope helped save his wife’s life.

We use cookies to ensure that we give you the best experience on our website. If you continue to use this site we will assume that you are happy with it.Accept